*Original broadcast on the BBC.

Easter is just around the corner and communities of all over the world are preparing for the holy celebration. Beginning on Ash Wednesday and for the 40 days that follow, in a period known as lent, Christians pray, fast and ponder the suffering and death of Jesus. For a Greek Orthodox community in Florida, the ancient form of Byzantine chant unique to their faith is highlighted during this time of soul searching. Located on the gulf coast just of Florida just northwest of Tampa, Tarpon Springs has been attracting Greek immigrants for decades and has become one of the areas most colorful ethnic enclaves. Maria Bakkalapulo grew up not far from Tarpon Springs and visits for a special concert of Byzantine vocal music.

Maria: Squeeze into a pew for Sunday services at St. Nicholas Greek Orthodox Cathedral I tarpon springs. Or stroll down the historic Sponge Docks nearby for a meal at one of the many Greek restaurants lining the strip. And that should be enough to convince anyone that you are in an area proud of its heritage and faith.

The head psalti, or cantor, of St. Nicholas, George Pappas, prepares his singers for a concert of Byzantine sacred chants.  He says that Byzantine music is an essential element of devotion in the church:

Pappas: Because the Orthodox faith and the Byzantine music go hand and hand. One cannot go without the other. People love it because it applies very well to the religion. it is a music that you can understand and you can distinguish that it belongs to the church and not the outside. So it’s a very distinctive type of music.

Maria: What is known today as Byzantine music has been developed and refined for hundreds years. The beautiful Orthodox hymns can be traced back to the 4th century. The principle instrument is the human voice.

Mr. Pappas got involved in Byzantine chant as a teenager in Greece, and has never looked back. He says that singing in the church and encouraging others to do so as well, is his purpose in life. And his efforts seem to be paying off, as more and more people in the Tarpon Springs community are showing a renewed interest in this ancient form of music.

Pappas: Well executed Byzantine music elevates you to God. If done properly, people will pay attention. Now that choirs are coming from Greece, we have gained a better name to the youth. We can train the young generation and survive. This music is the “jewel” of our church.

Maria: And here in Tarpon springs, the younger generation ARE interested in this ancient music.  16 year old Konstantine Laggos says he originally came to singing lessons because of family pressure… but now he loves the music for itself:

Kosta: My grandfather has always wanted me to do it and he kind of pushed me into it. As I started to learn more and more about it, I got really interested in it. I just enjoy listening to it and chanting. It’s a new experience. I just like the way it sounds… it is a great tradition and it shouldn’t die out. It is very ancient.

Maria: Father Tryphon, the dean and priest of the Cathedral for the last 27 years, says the tradition is central to the Orthodox faith:

Tryphon: The Byzantine chanting is a classical music. You cannot change it. It contains the word of God. And the word of God is yesterday, today and tomorrow. That’s it. It is every day and everyday is modern. Let’s face it. You cannot modernize this beauty of chanting of expression of your soul with your mouth and singing towards God. That’s it.

Maria: But even so, Father Tryphon accepts the music is probably destined to change::

Tryphon: As the old timers and middle aged people who were attached to this music are going to depart. Their children will reminisce, though, about these years when they were going with their parent to the churches and when they were exposed to this type music. They will reminisce. I don’t think they will not abolish it, really. I don’t think so, no matter what. There will be American born people who will try and translate it those hymns and will sing them in the same way as we sing now, but in English. They are doing this now. The locals, they have to create their own aspect of Byzantine music. If they want to keep something sacred and historical, they have to do that. 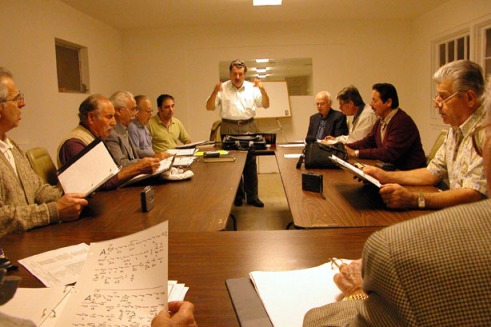 Maria: It’s up to the next generation of Greek-Americans to decide whether the sacred Byzantine chant that was cherished by their parents is relevant in their lives now. 15-year-old Demetre Mott,  started learning Byzantine chant after hearing Mr. Pappas sing. He’s now the youngest member of the group, and Demetre feels that chanting the hymns in English would not be the same:

Mott: Something as old and as very treasured as Byzantine music is to Orthodox people, to change would to lose it. That is a true ancient Byzantine chant to glorify God. A lot of people would like to see it change, but how would you change it? How would you change it without really losing the essence of the Greek language and the true Byzantine style? Where the tradition is not preserved, that’s where we are going to lose the music. We are going to lose the feeling – the mystical feeling about it. Yes, it is in jeopardy in America right now. There aren’t a lot of people to take it over.

Maria: For the young generation, do you think it is because they cannot relate to it, or do you feel it is something else?

Mott: Children, their top priority is not church anymore. If a family’s top priority is church, then they come into the church. They wake up early and bring their family to church. It’s part of the whole life and religious experience

Maria: As the congregation makes its way next door for coffee and dessert in the parish hall, people hum the songs they heard that evening. George Pappas has invitations to teach and perform Byzantine chant all over the United States  and he’s optimistic that the tradition will survive.  Just miles away, though, another Greek Orthodox church has already started to integrate English translations into the sacred hymns.   And with the Greek population in Tarpon Springs slowly shrinking… Mr Pappas has a big challenge on his hands.