*Original broadcast on the BBC.

Once the Portuguese withdrew from East Timor in 1975, the colony was quickly invaded and annexed the following year by Indonesia. In its 24-years of struggle under Indonesian rule, the East Timorese used music as a powerful force to express their anger, anguish and support for separatists hiding in the jungles and in the mountains. Cinco de Oriente became the musical heroes of resistance movement in East Timor. Today, the spirit of this legendary group is re-born in a new generation of musicians tackling the social issues that the East Timorese face today.

MARIA: Two-hours drive west of Dili, villagers complete the rebuilding of a sacred house, or Uma Lulik. These sandalwood and teak structures hold the swords, jewelry and tapestries of past generations.

The original Uma Lulik was ravaged by flames 24 years ago when the Indonesian forces burnt whole villages to the ground as their attempt to wipe out traces of East Timorese culture. Those locals who weren’t killed by the soldiers scattered to the mountains and jungles. In hiding, their animistic traditions – or the practice of ancestor and spirit worship – survived with the artifacts and in the memories of the people.

41-year-old Manuel Almado grew up in Batibo. He believes the Army felt threatened by the strength of local East Timorese culture.

Manuel started the group a year ago and is encouraging the younger generation in East Timor to play this acoustic style of music.
(Photo by Maria Bakkalapulo)

The group meets up for practice every week at Manuel’s home. (Photo by Maria Bakkalapulo)

ALMADO: The Indonesian army wasn’t interested in our beliefs, but they were interested in politics. They thought that if the East Timorese continued meeting at the Uma Lulik, then they would keep on believing in their own culture. Their soul and strength would be in East Timor, and not in Indonesia. 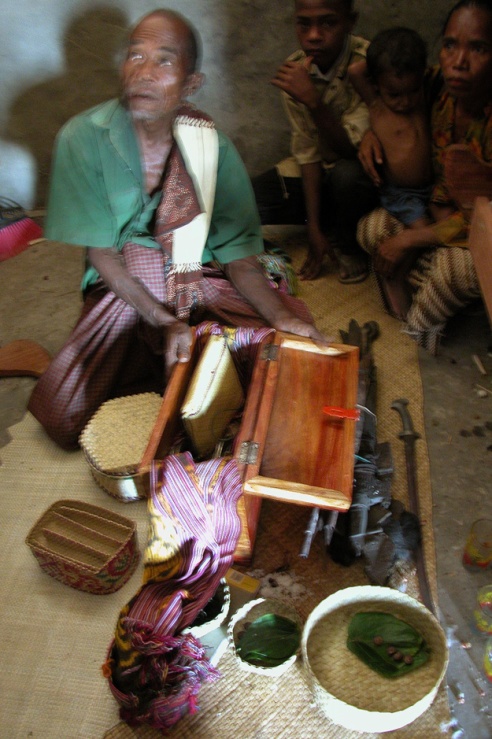 In the district of Maubaru, villagers carefully place the swords, tapestries and jewelry of generations past nside the Umu Lulik, or sacred house.
(Photo by Maria Bakkalapulo)

MARIA: After the sun sets, the elders gather around the Uma Lulik, while outside, people join in a circle for the tebe tebe, an age-old dance performed to the songs of their ancestors.

Since independence from Indonesia in 2002, musicians have found a new reason to make music – freedom.

Every Saturday night at a local beach bar in Dili, you can hear Cinco de Oriente playing just down the road from a cluster of government buildings. Before the 1999 Referendum 5 years ago, musicians were not free to play to large groups of people — especially if they were singing songs about solidarity. Cinco de Oriente – a new generation of musicians named after the popular legendary group from the 1970’s – sings about life today in East Timor in the local language of Tetun.

In the late 1960’s, the original members of Cinco de Oriente traveled the countryside singing songs about love. 58-year old Sico Mulohy started singing in 1968 while he was serving in the Portuguese army. He joined Cinco de Oriente in 1972. Mulohy reminisces about life before 1975:

As the sun begins to set, the kids play around a drum that will later be used in a ceremony to honor their ancestors. (Photo by Maria Bakkalapulo) 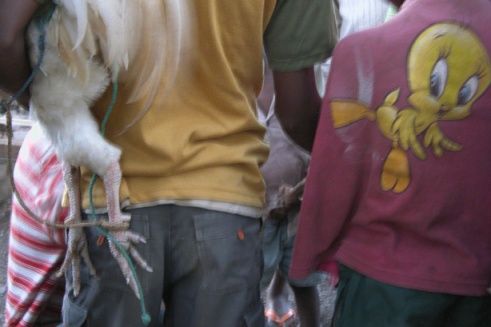 The men of the village place their bets for a cockfight that begins before dark. (Photo by Maria Bakkalapulo)

MULOHY: You know, from 1972, our lives were the best. We were free. We were still young. We worked and made money. Every Saturday we would go to the pub and do a song. Make a little money and have a drink. We were always happy. We never thought about bad things. It was an important time, a free time, for us.

MARIA: After the Indonesian forces invaded in 1975, lyrics inspiring solidarity replaced folk and songs about love. Music became an expression of anguish and an outlet for protest for Cinco de Oriente. Though, singing these songs came at a high price. Those musicians who were against the Indonesian occupation were mostly imprisoned and killed. Three of the members of Cinco de Oriente lost their lives for singing songs against the war. It’s said that they were pushed from helicopters plummeting to their death. Their bodies never to be found and the recordings they made, nearly destroyed. But the memories of their songs still survive.

MARIA: Mulohy’s eyes fill up with tears as he talks about his last years together with the group:

MULOHY: I was afraid for myself and for my friends. They people of East timor loved my music. It was very popular. I told the people of my country that they must be strong.

MARIA: Why were they so afraid of musicians? Why was music such a threat to the government?

MULOHY: Because I am popular and my songs talked about the resistance. “You can punch me or kill me,” I used to sing, “but you must get out of here.” The Indonesians invaded my country. They knew the music was very powerful. If they allowed it to be played on the radio, everybody would discuss it. It was about freedom.

MARIA: Mulohy spent four years in prison and had to endure regular beatings for singing out against the Indonesian occupation. (bring in above Corig2) Cinco de Oriente’s popularity could not be extinguished, though. The members became heroes, and their music, a symbol of unity for the East Timorese for over two decades.

MULOHY: Many of my friends from the group are dead. But I still feel like they are alive now. People must understand that these people gave their lives for a reason. And now we are free. Now we have to write music to rebuild and support our country. To make it something better.

LAMOS: They escaped into the jungle. If they come up and play, people will listen to them because they were so famous at that time. Music is a really good tool  to pass information to each other. If we say we want to be free, then the Indonesians will kill you. But if you sing a song, the meaning of the words will tell you that we have to be free.

MARIA: Nowadays, as a training coordinator for the Agricultural Department, Lamos travels around the countryside to work with farmers. He often uses music to help build pride in the people:

LAMOS: To tell about the farmers who wake up early in the morning. They go to the field with only a piece of casaba in their bag and they have a cup of coffee. And they come back in the afternoon. I’m just trying to tell people how farmers work hard. Then, all the people have to respect them. Especially their children. If their parents work so hard in the fields, they have to study hard and do well. So then their parent can feel that even though we work so hard, that their work has a value. Has a result. Then they feel happy and feel proud of their children.

MARIA: As is painfully common for many East Timorese, Lamos’ father died in a political prisoner, while his brother and sister lost their lives to starvation during the war. He feels it is his obligation to do whatever he can to make things better for his country.

LAMOS: We can still think about what has happened in the past, but we have to move on and think about the future and live in harmony. We are trying to not only entertain people, but to encourage people. Encourage them to work to do something different to change their social situation. We don’t want to suffer anymore. We don’t’ want to cry anymore. That is why we use music to give energy to the people to do something.

Bagia, East Timor. Christianity is the dominant faith throughout the country.
(Photo by Maria Bakkalapulo) 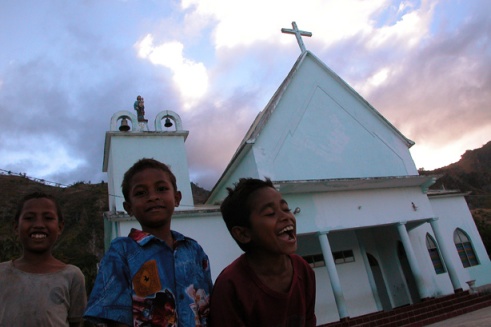 Bagia, East Timor. Children from the church’s orphanage play outside to pass the time. (Photo by Maria Bakkalapulo)

MARIA: Agio Pereira, who now works as Chief of Staff to East Timor’s President, Xanana Gusmao, was part of the original Cinco de Oriente before he left in 1973 to study abroad in Portugal. He says the future will be challenging for the youth:

PEREIRA: The young generation is adapting to a new framework. We had our own. The framework changes, but the memories don’t. They have a much easier environment than we ever had. They have a much more difficult road in a way because we used to have a lot of support out there from the community. In some ways they have a much easier environment, but on the other hand they have a tougher challenge to reaffirm themselves are a relevant group or musicians from the country. Why? Because in 24 years, have created a range of variations of identity that have become mish-mashed in the youth because they suffered different influences. Many did not leave, but many left to Indonesia and came back with new culture, or assimilation, acculturation. Many went to Australia and many Portugal. So we are a bit like a small Israel here with a confrontation of ideas and perception. But like I said, w are a reservoir of who we are is where we came from.

MARIA: With rampant poverty and a 50% illiteracy rate, Ego Lamos believes music continues to be the best way to get the message across to the East Timorese:

LAMOS: When I do training, I sing the song called “Hadomi Timor.” That is a song I use all the time with farmers to remind the people to love their country and to love their village. Love the country and, the question, what will the country become? (sings some of the lyrics) ‘East Timor I really love you…’ (sings again) ‘What will our country be? All of the East Timorese people have to work hard to liberate the people from being poor and from illiteracy. That is the way I use the song to help my country with music.

MARIA: During the years of occupation, the music of Cinco de Oriente gave hope to the East Timorese. Now, after nearly 2 1/2 years of independence, the newly reformed band strives to help the tiny nation find its own identity. 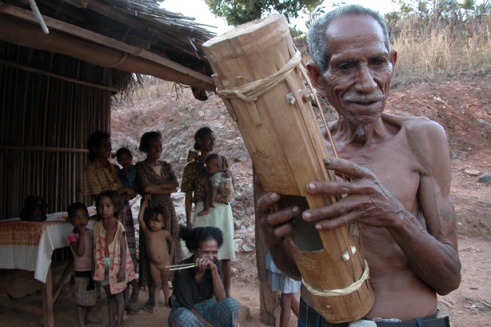 Jean Baptiste lives in a village tucked away in the hills of East Timor’s capital city, Dili. He learned to play the lakado from his father.
(Photo by Maria Bakkalapulo)

The lakado is rarely played today. Here, Baptiste performs with his wife. (Photo by Maria Bakkalapulo)

One Response to “Music of Freedom in East Timor”